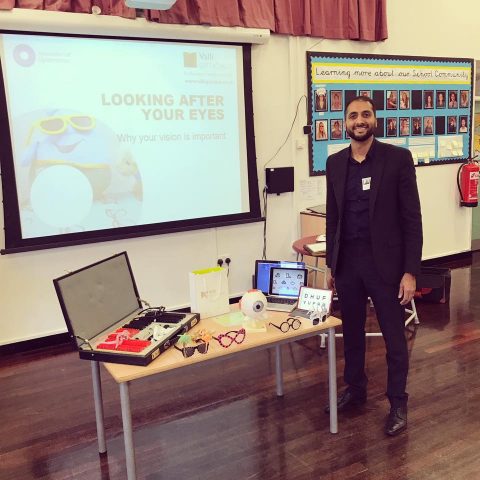 Valli Opticians has embarked on a schools roadshow to raise awareness of children’s eye health.

Over the past two weeks Moin Valli, optometrist and managing director of Valli Opticians, has visited Honley Junior School, Honley Infant School, Netherton Infants School and Moldgreen Community Primary, all in Huddersfield, where he spoke to pupils about how to look after their eyes.

During the fun and interactive talks he told the children about the make-up of the eye, what happens in an eye test and even showed which foods to eat to keep our eyes healthy.

Moin will be giving similar talks to children at more schools in Huddersfield and Calderdale over the coming weeks.

Optometrists from across the Valli Opticians Group, which has multiple practices across the North of England including in Lockwood, Almondbury, Honley and Meltham, will also be giving school talks in their areas.

Moin explained: “It’s staggering that one in seven children in the UK (that’s over 1 million children) have an undiagnosed vision problem that can impact their learning and development. This is around four children in every classroom!

“Our schools roadshow is just one of the ways in which we are promoting the importance of regular eye examinations for children. We recommend that children have eye tests at their local opticians practice from the age of three, or sooner if parents suspect there may be a problem. All children under 16 are entitled to free eye tests through the NHS.”

Valli Opticians believes there is a general lack of awareness among parents of the importance of regular eye tests and that one reason for this could be the level of information about children’s eye health in the Personal Child Health Record (commonly known as the ‘red book’).

The book is a national standard health and development record of a child’s early years which is given to all new parents and carers.

Moin said: “There is no reference to visit an optometrist at all for a full eye examination in the book yet, in contrast, when it comes to teeth parents are rightly encouraged to regularly take their children to visit the dentist.

“The red book is a great tool that gives parents and carers a range of important advice about a child’s development and I am hopeful that it can be enhanced by more information on eye health. Whilst the current information in the red book is relevant, we are calling for it to be clearer.”

Valli Opticians has launched an online petition calling for a simple addition to the red book which they believe will significantly increase awareness of the importance of regular eye examinations for children. They want the following text to be included:

You can sign the petition here or by searching ‘change.org valli opticians’.

The Association of Optometrists (AOP) recommends that children’s eyes are comprehensively examined by an optometrist from the age of three, or sooner if parents are concerned. Detecting problems early on offers the greatest opportunity to aid normal visual development.

Children may not realise they have a vision problem, so without routine tests by an optometrist there is a risk that any problems could go undiagnosed for months or years.

“Some children have vision screening when they start school but this does not happen in all areas of the country. Where it does happen, the screening is carried out only once, at the age of 4-5.  A child’s eyes can change after this age and this will not be identified by the screening programme.”

He added: “The red book is where advice on childcare starts for most parents. This is why this one small change in the red book would make a HUGE difference to so many children.”